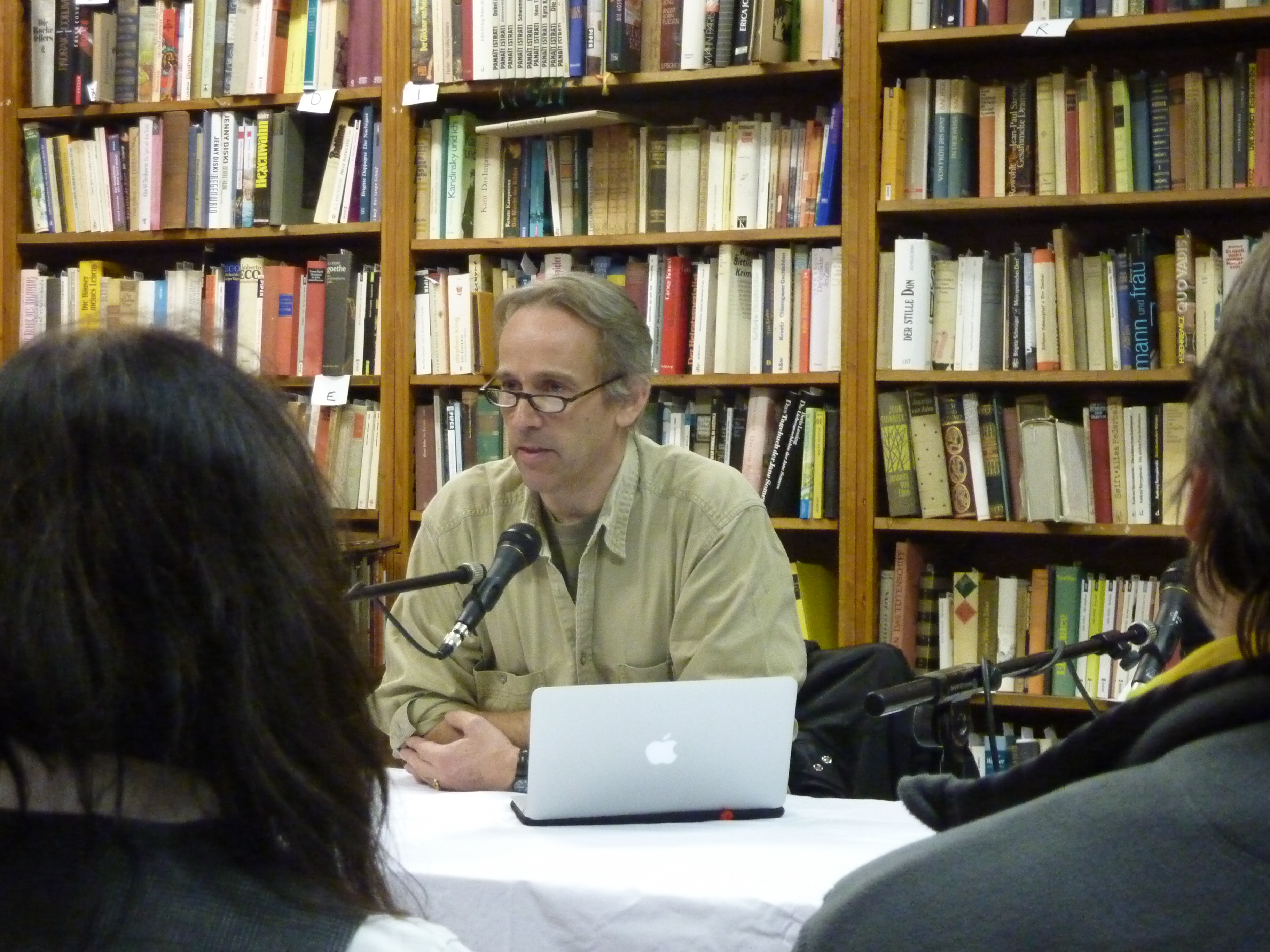 I haven’t been to a reading in a very very long time. In fact, the only reading I remember going to was about 15 years ago when I saw Matt Ruff reading from Sewer, Gas and Electric with a (back then) unknown German actress named Franka Potente reading the German translation.

I do remember how funny that reading was. Which makes me wonder why I’m not going to these things more often. Sure, my favorite authors all come from the United Kingdom, the United States or Japan (despite one German author who seems to avoid public performances like the plague), so it’s not that often that I see a reading scheduled here with someone I really want to see.

Jasper Fforde is one of those guys. He is an author who fascinates me in that he writes stories that are more or less impossible. The Thursday Next books were crazy enough with all the people jumping in and out of books and characters being kidnapped from their stories and a world obsessed with literature and still kind of a scary police state. It was maybe an epiphany book in that I read it and some lightbulb went on inside when I realized: „Oh my god, authors can do that?!?“ Yes, they can! It may be the book that started my obsession with weird books. And I mean a good weird.

It made me realize that my favorite kinds of books are those that should not make sense. Because they have conceptual sharks (The Raw Shark Texts) or ninjas and mimes (The Gone-Away World) or scary giraffes (Un Lun Dun) or a society based on color perception (Shades of Grey). It’s the books that make me go „Whoa!“ every couple of pages because the author does something unexpected and totally outrageous and it shouldn’t make sense, but it does.

I guess I would have stumbled over these books eventually but I still feel thankful for Jasper Fforde for making me realize that these are my books. And I feel thankful for Caitlin for recommending it back in 2005 when I asked my blog readers ‚What Shall I Read Next?‘ and she said ‚Well, The Eyre Affair, OBVIOUSLY‘. Yes. Exactly. Obviously.

So, imagine my joy when I saw that not only was Jasper Fforde coming to Germany. He was coming to a town near where I lived and he was bringing one of my favorite voice actors, Oliver Rohrbeck. So the very next chance I got I went to Frankfurt and bought myself a ticket.

Let me just start with it was so worth it. Every minute – I kid you not – was great.

It started off with Jasper Fforde reading a part from ‚Shades of Grey‘. Then Oliver Rohrbeck read a part of the German translation with such great enthusiasm that I am seriously considering getting the German audio book. Very untypical for me since I usually either have the audiobook or the book and I usually don’t buy translations of English books.

Then they read a dialogue together jumping back and forth between German and English with Jasper Fforde playing the part of the Apocryphical Man and Oliver Rohrbeck doing the part of Eddie Russett. And yes, it was definitely strange, but surprisingly enough it worked. It worked pretty well, actually.

My favorite part though was when Jasper Fforde was talking about how he started writing and how he created writing challenges and dares for himself by thinking up a completely strange situation and telling himself „Now, you write yourself out of THAT!“ and constantly walking the fine line between silly (good) and stupid (bad). „What if…. a man turned into a banana… Now try to write a story around that without being it borderline stupid.“

He also talked about how we started to write the Nursery Crime novels (which he completely rewrote before they were published) because he was really questioning the stories behind fairytales and nursery rhymes. „So Mama Bear and Papa Bear are sleeping in separate beds? WAIT A MINUTE! That can’t be right. Something’s not okay with their marriage.“ Or questioning the physics of porridge. „The whole book is about trying to explain the porridge.“

So, do you see? When I say it was awesome, this is what I mean. It was a great time with a witty and extremely funny author who threatened to not let us leave UNTIL SOMEONE ASKED A QUESTION. (Eventually quite a few people asked questions, so I guess we just needed that initial scare.)

After the actual reading, talking and Q&A I hung back a while talking to other people while realizing that I definitely have to read the Thursday Next books again. And then the Nursery Crimes. And then probably the Dragonslayer books. When the line for book signings was nearly gone, I got up and into the line and after a bit of joking around about signing my Kindle I realized that yes, nothing would be cooler than a Jasper Fforde signature on my Kindle. Why the hell wouldn’t I want to have that? It’s even better than a signed book because I have my Kindle with me always. How could I ever not want that? 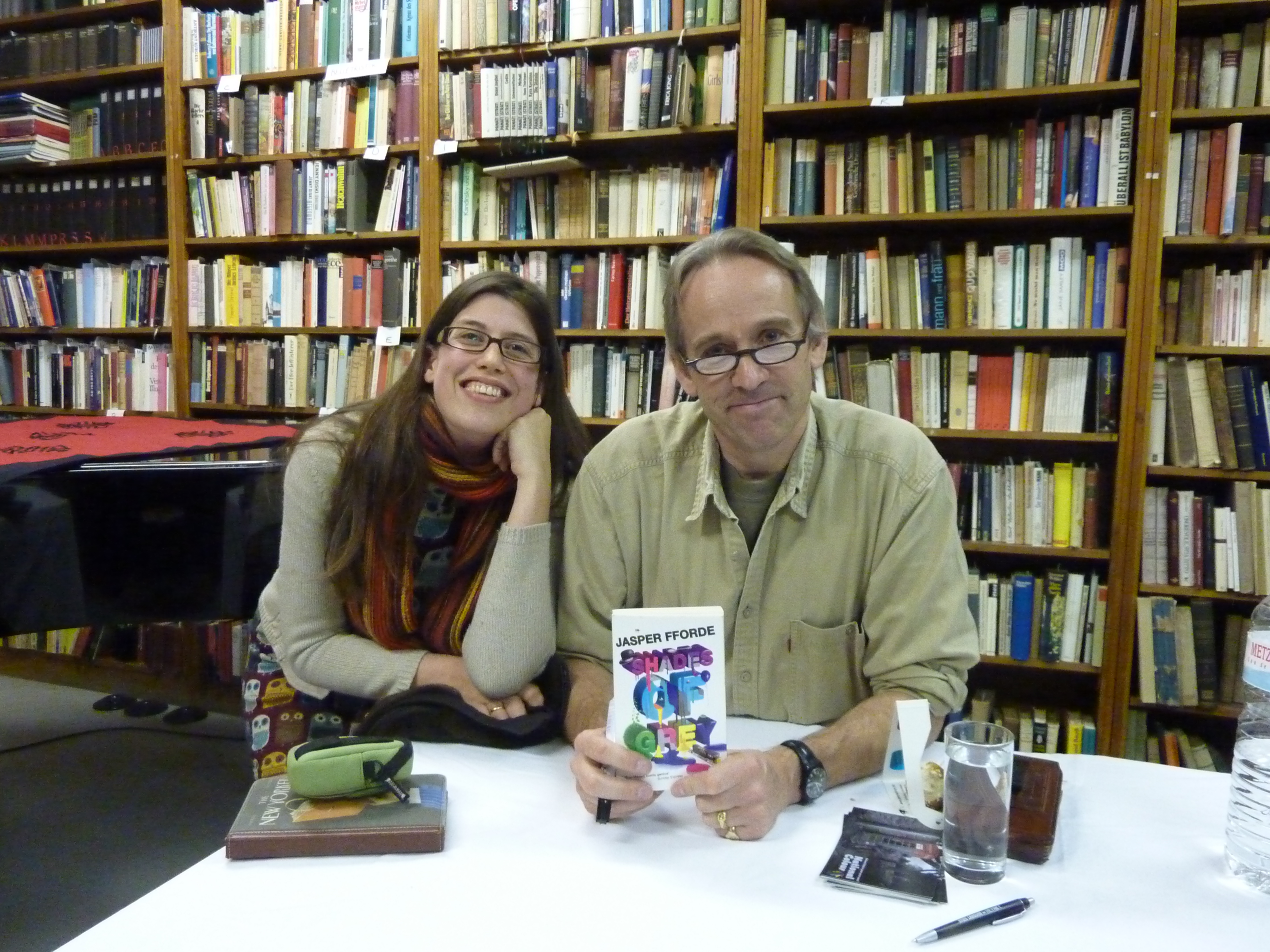 I also took a cute dorky photo with me very obviously being the dork and Jasper Fforde being the amazing author that he is.

So. If you ever have the chance to see Jasper Fforde talk, GO! I mean it. Go! And if you haven’t read any of his books I recommend you do so. I don’t care what you choose, just start with one – although I know that The Eyre Affair is the typical Fforde Addiction Starter, so if you’re unsure, start with this one.

And of course a big thank you goes out to the Buchhandlung Schutt for organizing the evening.

And here are the rest of the pictures I took (and had taken by friendly strangers).