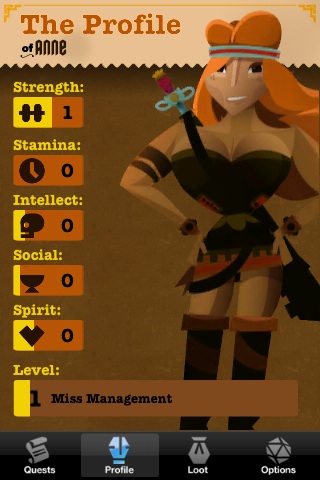 Remember when I said „Game base everything“? I was mostly talking about my love for Stack Overflow back then, but there are more and more examples of how making a game out of something (mostly in terms of earning points and badges) can motivate people to take part in something that might otherwise seem suspiciously like work.

Now I stumbled upon something that took one of the most boring things you know – your personal to do list – and turns it into… wait for it… an RPG.

It’s an iPhone app (also available for the iPod touch) and it’s called EpicWin. It’s fairly simple and doesn’t contain any fancy graphics, but it does the trick. You can add your items to your to do list, assign points to them and decide which of your for skills you’re levelling up (stamina, strength, intellect, social and spirit are the options).

For each quest (i.e. item on your to do list) that you manage to complete you get the points and advance further on a little map, collecting loot once you’ve reached a certain place. You also get level-ups for your skills.

Of course, you still enter the tasks by yourself. Theoretically you could just add quest after quest and advance in amazing speed, but where would be the fun in that? If you don’t need a task manager, you won’t need this app. But if you do need a little trick to manage all the not-so-fun chores that pile up around you and at least give you the feeling like you’re advancing to somewhere somehow, this might give you a bit more motivation than just plain old to do lists.

Mind you, if you need to really organize your tasks, add tags and priorisations, define contacts and so on, this also isn’t for you.

It’s for people like me who just need a little push sometimes and who like to pretend they’re a warrior princess in a fantasy world for whom making an appointment with a self storage facility sounds just a bit more fancier if it’s a quest which will add one point to your intellect skill.

You can visit their website here or have a look at the app in the iTunes AppStore here.

PS: And now I have earned my fifty points of intellect and advance further towards my next loot. Yay!

When working on a feature we often have to check the application’s log files. The easiest way was viewing them with Notepad, but that means that whenever something new was logged you have to close and open the file to see the actual log entry. Then one colleague recommended mTail, a tool that hooks itself to a log file and will automatically appends everything that is added to the file to its UI. It’s a very simple tool, but it does exactly what I need to debug an application and be able to check what is logged without constantly closing and re-opening the log file.

I’ve written about Launchy before, the tool that lets you open about everything with a bit of typing. I use Launchy all the time to access applications, folders and documents and it makes my life a lof easier. A colleague recommended Everything and while it’s very similar to Launchy it does not quite do the same. Everything is the fastest search tool I know. I use it mostly to find out in which Visual Studio solution a class is located, a very basic task, but one which I have to do so often that Everything turned out to be a real time saver here. Another sweet thing I noticed is that it allows using Beyond Compare by right-clicking on files. So instead of just finding files and then going to their specific folders, I can start comparing right from within Everything once I got all my computer content filtered down a nifty list of exactly the files I’m looking for.

There are two other tools that you probably already know, since they are widely popular, but I’m going to mention them anyway:

Evernote is a simple, but powerful organization tool, that lets you clip anything from anywhere. It syncs to pratically every device there is, so I’ve got it on all my PCs, my iPod and my Android. So, whenever I see something worth saving for later I hit my Evernote shortcut and I have access to it from everywhere. It’s also a great tool to take notes, e.g. when you’re in a meeting. The only problem I have with Evernote is that my note collection is getting a bit out of hand. I guess that’s the drawback from being able to take notes of interesting stuff with just one keystroke.

Dropbox on the other hand is a simple file sharing tool that allows you to sync files to all your computers including your iPod and iPhone. I’m still waiting for the Android application. You simply install it and can drop files into your Dropbox folder. This folder will automatically push your files to the cloud and back to all your machines that are linked to the same Dropbox account. Dropbox also allows you to share folders or make files public. It’s amazingly easy and lets me transfer files quickly whenever I think I want to have access to them from… well… anywhere else.

And by the way, if you install Dropbox using the link in this blog entry, I will get an extra 250 MB worth of storing space. Which I really could use. So if you actually plan on using it, please use the referral and make me a bit happier. 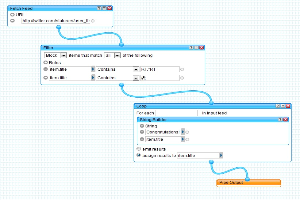 I know that Yahoo Pipes has been around for quite some time, but I have never had a use case where I thought I needed it. Frankly, I only had a vague idea about what it was.

That is… until today. I’m still not totally clear about all the things the pipes can do for me, but there’s one thing that I now know they can do: help me build an automatic retweet bot.

Admittedly, this was a fun project whose other purpose was to keep me sane after more than two straight days of configuring security for nearly two hundred objects (don’t ask, you just don’t want to know), but it was quick and successful and now that I’ve tried it I wonder what other cool things I could pipe together.

I started with this video, which is a step by step guide as to how to build an automatic retweeter. (Actually, once you’ve watched this you can pretty much stop reading here. On the other hand, it would be nice if you’d read on.) Fortunately what I wanted to do was even simpler. I just wanted to retweet everything from another tweet account.

1. Create a Fetch Feed module and add the feed you want to retweet.

3. Create a Loop containing String Builder to manipulate the item.title. In my case I added some text and an @ to the start of the string to simulate a retweet with comment. Then assign this to item.title. Link this module to the Filter module.

(Note that I’m pretty sure that using item.description would have worked just as well, since it looks like Twitter doesn’t really care to differ between the two.)

4. Connect that last module to the Pipe Output and check it out.

Now, there’s a handy tool called twitterfeed which will take any feed and route the output through to a selection of services, including Twitter. You just define the feed you want to use as your input, link to it your Twitter account (Facebook and a couple of other services work, too) and you’re ready to go.

You can define multiple inputs and multiple outputs, define which part of the feed’s items you would like to pass on (title, description or both) and define the update schedule (30 minutes are the shortest refresh cycle). There are also a couple of other settings like setting prefixes or postfixes or filtering the input feed, but I didn’t have to use them.

With that all setup I had to be very patient to wait until twitterfeed finally sprang into action, but it worked perfectly.

Now, this was a pretty useless project in terms of actual results. I’m retweeting someone else’s tweets. As far as making the world a better place goes, this doesn’t help a lot. Still, for a quick introduction to Yahoo Pipes this was a great way to start. Now I keep wondering what else I could pipe together with a more useful output. Any suggestions? Experiences? Ideas?

I started to use simple productivity tools while reading The Productive Programmer by Neal Ford. Although there were a lot of tools for all kinds of things mentioned in this book, I decided to go slow and pick just a very limited selection and see whether they made any sense for my way of working.

Launchy in comparison offers mostly basic launching functionality. It’s running in the background and can be brought forward by holding alt and hitting the space bar. You can probably change the keyboard shortcuts, but the default combination is pretty comfortable and easy to use, so I just left it as it was.

You then start typing the name of the application or file you want and Launchy scans its catalog (we’ll get to that in a minute) for it. It will offer the most likely choice, which you can then open directly by hitting enter. You’ll also get a list of other matching results that you can access using the up and down keys or click with your mouse.

As for the catalog, you need to set up the catalog by telling Launchy which file types in which folders should be part of the searchable catalog and then scanning your machine accordingly. At the moment I included all applications and folders and .doc and .pdf files from selected folders.

Launchy proved to be a perfect tool for people like me who keep their desktop very, very clean and usually access files and applications by using quick launch or navigating directly to the respective folder. I like to have sensible folder structures to put my files where they belong from an organizational point of view. On the downside that means that I have files all over the place and need to change folders very often. Launchy makes it very easy to access a file or folder and saves me from having to click through folder after folder and search through a long list of file names to get to the stuff I want.

I wouldn’t have expected that radical a change, and from the outside it probably only looks like a small thing, but I honestly wouldn’t want to go without Launchy now that I’ve gotten used to it. The only disadvantage I noticed so far is that you have to rescan your catalog every once in a while to make sure that new files and applications are added to the catalog. I’d also like Launchy to get a few extra features, bringing it a bit closer to the power of Quicksilver (an application I wouldn’t even dare writing about, because I feel like I’ve used to less than five percent of its capability so far) than it is now.

However, I can only strongly recommend that you try it out for yourself. You can download Launchy at http://www.launchy.net/. Plus, it comes with a cute icon. Just saying.