About a month ago I switched from WordPress to Squarespace, started a blog at Tumblr and kept my Twitter account.

I intended to use this blog a bit more gadget/techonology/pop culture/development oriented with longer articles rather than short notes about my daily going ons. The blog at Tumblr was intended as a container for all the things that I stumble upon on the net and otherwise. And Twitter… well, Twitter is Twitter and I use it however I please with whatever I can say in 140 characters.

(There has been one tiny change though, as I started to tweet in German as well. There’s no fixed rule to that, it just happens. I’m aware that this means that some of my followers won’t be able to understand everything I tweet, but I decided that I can live with that.)

So, how’s that working out for me?

Almost surprisingly, the answer is: Pretty good. I was worried that I would have a lot of gray areas where it wouldn’t be clear what would belong where. Or that I would start posting things duplicate times in multiple places.

Turns out the lines I drew make perfect sense. Granted, it’s only been a month and I haven’t posted a lot on this blog. Which was kind of the point. I don’t feel the need to post an entry just because I haven’t written one in the last week. I wait until I find something that I can write about in some length and then I do it. If that means that two weeks pass between blog posts, then so be it.

Tumblr works fantastic for me as well. Now whenever I find something on the web or a quote in a book or from a song that I like I just post it on Tumblr and that’s it. No need to comment on it in detail.

So, all in all, so far the transfer and shift in splitting content between services is working amazingly well for me. Of course I can only speak for myself. Not sure how it’s working for you. To get a complete idea of what I’m up to, you now need to follow me on three places. On the other side, that’s what RSS is for, so your feed reader of choice is your friend here once again. 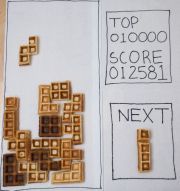 Splitting responsibilities the way we do makes perfect sense. We do have those gray areas where it’s not that clear whether something belongs to platform or might be a feature, but in most cases it is pretty clear what task belongs in what team.

I want to compare that to my old version of Tetris on Nintendo’s GameBoy (yes, the very, very old one) where on one side of the screen the next tile to come would be displayed. I distinctly remember that I deactivated that option, thinking that it wouldn’t change my game. I didn’t think that I even bothered to glance at that tile.

So, I did turn it off and… oh my god… I got so much worse! Without realizing it, I always noticed the next tile and some part of my brain clicked and made me integrate that information in my gameplay.

Why the comparison? I think that sharing information between teams works the same way. When I know what the other team does, what they’re currently working on, what they plan to deliver and when they plan to deliver it, I can take that knowledge and have it in the back of my mind while I go about my own tasks.

Knowing what another team does might not directly affect my work. I think this is also one of the main reasons why communication between teams may be lacking a bit: Since our work is not directly affected, information about what happens outside of our little feature realm seems like a nice-to-know thing. I don’t necessarily need it and it probably doesn’t change how I should go about implementing my feature right now.

Nor do I have the power to do anything about it if I don’t like it. Whatever the other team is working on will sooner or later pop up in my code anyway. As long as I don’t have a say in that matter, why would I want to know any details? (I might be able to mention my concerns and ideas, though. So that’s a plus as well.)

However, developing with new tools and technology brings enough surprises as it is. Eliminating what other surprises – even little ones – there might be as best as I can means that I can work more comfortably and confidently on my own tasks. It gets me out of the little vacuum of my team and reminds me that there is a world outside of the feature set currently implemented. And whatever happens in the future I might at least have heard of it before.