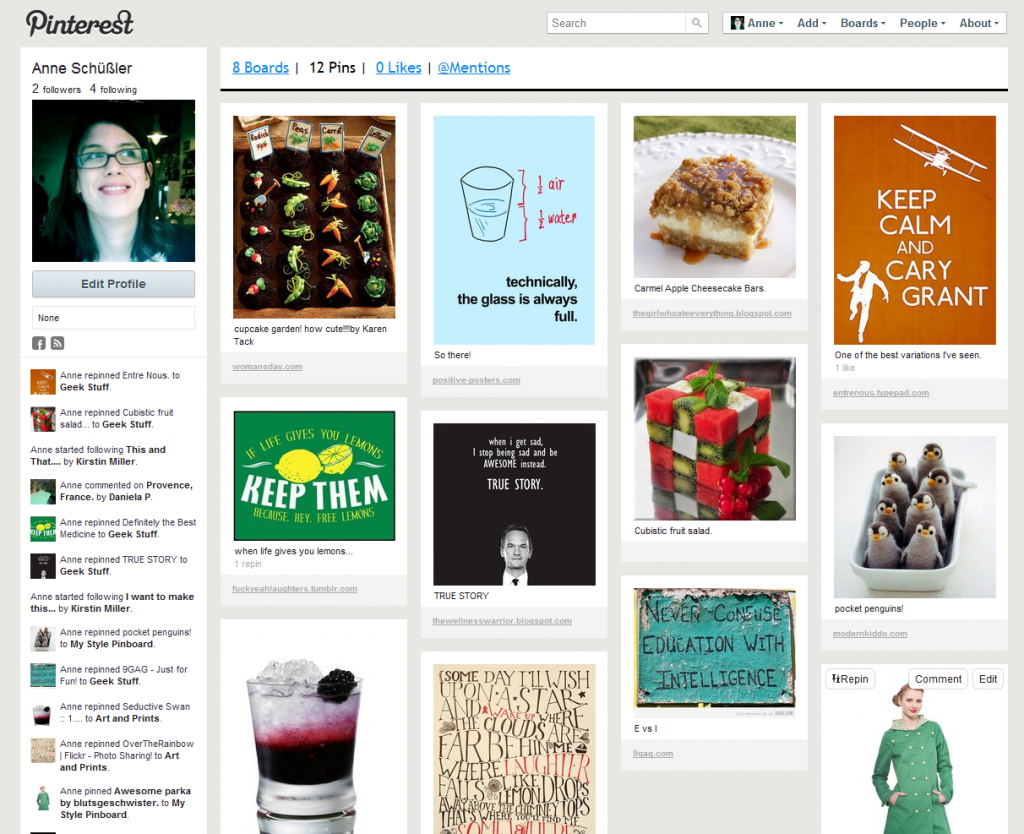 Pin it! Well, that’s it basically…

One of my colleagues from my old job sent me an invitation to pinterest, which she said she was already addicted to. Because I try about every new internet thing I find I quickly registered and checked it out and so far I like it. It’s been less than 24 hours though, so we’ll see whether I will stick to it.

So what is it? The screenshot should give you a pretty good example. My first impression was that it reminded me a lot of tumblr, which I love to pieces, insofar that it allow for easy sharing of things you found on the web. It is a lot like tumblr, but then it’s not. From what I could see so far, pinterest is images only and the whole experience is different from tumblr.

On pinterest’s own site, they say the following:

Think of Pinterest as a virtual pinboard — a place where you can create collections of things you love and „follow“ collections created by people with great taste.

People use Pinterest to collect and share all sorts of things — wedding inspiration, favorite T-shirts, DJ equipment. You name it, people are pinning it.

One major difference is that on pinterest you have boards, so that you can group whatever it is you want to share. You can follow other user’s boards, either all of them or selected ones. You can repin or like other user’s pins or just add new ones. All pins usually are linked to their site of origin, so that for any yummy food picture you can follow the trail back to the recipe, or you can follow the pin of that awesome dress to the actual vendor’s site.

All in all, great idea, lovely implementation. It’s very easy to use, pretty and sleek and I agree with Daniela, it’s crazily addictive.

The only problem for me so far is that it’s hard for me to keep up with all the services I signed up for. I’m trying hard to keep this blog alive, and while I have tons of ideas for articles in my head I never seem to find the time to write them down. (Who am I kidding, I’m so busy trying to finally catch up with my TV shows AND finishing George R.R. Martin’s Song of Ice and Fire books in time for the fifth one in July AND enjoying the lovely weather we have here AND practicing to play on my ukulele that I’d need another three to four hours a day to do all the things I want to.)

Anyway, I already use tumblr and I don’t know whether the two services are too much alike – at least for me – to be able to keep up with both of them (and I’d probably choose tumblr over pinterest if it came to that). However, since it’s easy to use and practically no hassle at all, I’m not ruling out that in the future you’ll find the stuff I like on this  blog and on tumblr and on pinterest. (And here’s what my friend Daniela likes.)

If you check it out and start to pin, leave me a note.