The coffee machine on our floor broke yesterday. This might sound like a little thing, but for most developers (as well as project managers and testers) this comes very close to a catastrophe.

But since we are a creative and communicative bunch, this is what you might see when the unthinkable has happened: 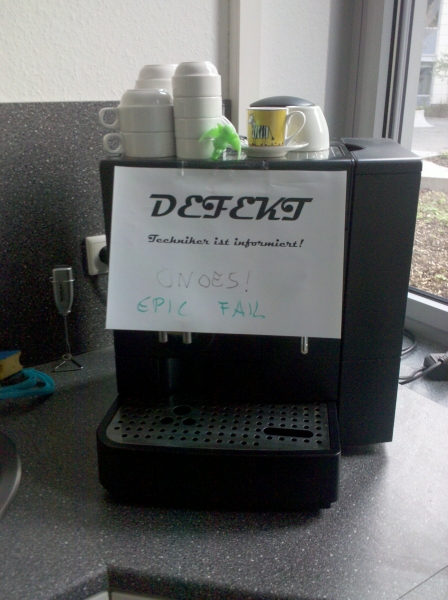 The original message says „Broken – Technician has been informed“. I don’t have to translate what desperate coffee-addicted people have added below that, do I?

The kitchen whiteboard also was used as an outlet to channel the despair: 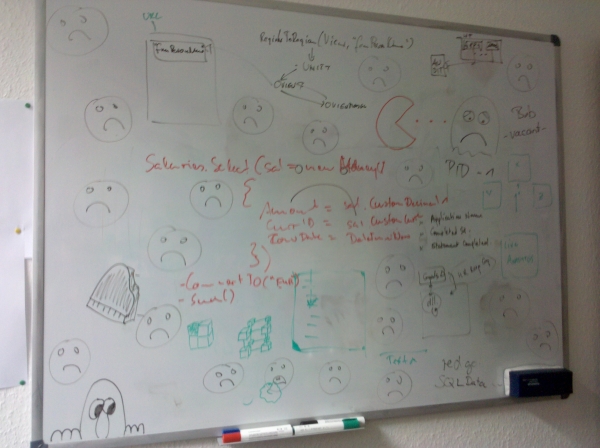 Don’t worry about what’s scribbled on there, but the many many unhappy „smilies“ should tell you enough about how we feel about our coffee here.

When working on a feature we often have to check the application’s log files. The easiest way was viewing them with Notepad, but that means that whenever something new was logged you have to close and open the file to see the actual log entry. Then one colleague recommended mTail, a tool that hooks itself to a log file and will automatically appends everything that is added to the file to its UI. It’s a very simple tool, but it does exactly what I need to debug an application and be able to check what is logged without constantly closing and re-opening the log file.

I’ve written about Launchy before, the tool that lets you open about everything with a bit of typing. I use Launchy all the time to access applications, folders and documents and it makes my life a lof easier. A colleague recommended Everything and while it’s very similar to Launchy it does not quite do the same. Everything is the fastest search tool I know. I use it mostly to find out in which Visual Studio solution a class is located, a very basic task, but one which I have to do so often that Everything turned out to be a real time saver here. Another sweet thing I noticed is that it allows using Beyond Compare by right-clicking on files. So instead of just finding files and then going to their specific folders, I can start comparing right from within Everything once I got all my computer content filtered down a nifty list of exactly the files I’m looking for.

There are two other tools that you probably already know, since they are widely popular, but I’m going to mention them anyway:

Evernote is a simple, but powerful organization tool, that lets you clip anything from anywhere. It syncs to pratically every device there is, so I’ve got it on all my PCs, my iPod and my Android. So, whenever I see something worth saving for later I hit my Evernote shortcut and I have access to it from everywhere. It’s also a great tool to take notes, e.g. when you’re in a meeting. The only problem I have with Evernote is that my note collection is getting a bit out of hand. I guess that’s the drawback from being able to take notes of interesting stuff with just one keystroke.

Dropbox on the other hand is a simple file sharing tool that allows you to sync files to all your computers including your iPod and iPhone. I’m still waiting for the Android application. You simply install it and can drop files into your Dropbox folder. This folder will automatically push your files to the cloud and back to all your machines that are linked to the same Dropbox account. Dropbox also allows you to share folders or make files public. It’s amazingly easy and lets me transfer files quickly whenever I think I want to have access to them from… well… anywhere else.

And by the way, if you install Dropbox using the link in this blog entry, I will get an extra 250 MB worth of storing space. Which I really could use. So if you actually plan on using it, please use the referral and make me a bit happier.

I recently read a short blog post at 37signals about the glory of not having to commute. While reading this post and the comments made, I was reminded once more of a feeling I have quite regularly:

I miss my commute.

Seriously, what I wouldn’t give for a solid 30 minute train ride to work and back. The problem that I have is that my commute is too short and I feel like it’s such a waste of time, because I get nothing done except maybe a bit of listening to podcasts.

Now, I have been an avid commuter for the last eight years or so. I had to travel from Bonn to Cologne for about one and a half years, before we moved to Leverkusen, which made my commute to work a bit shorter, but still long enough to spend reading. Even when I worked in Leverkusen for two years, I preferred the longer bus ride to taking the train,  because it gave me a bit of time to read or listen to music.

Sure, we moved here because of my job and in theory the idea of only being one train stop away from work sounded great, but I sometimes end up taking the streetcar which takes more than five times as long, but apart from stopping a bit closer to where we live also allows me to sit and relax for 15 minutes.

Now, I know that commuting can suck. I know about having to wait for late trains, missing connections, sprinting up and down stairs to the platform just to get there in time, freezing in winter or being rained upon in autumn. I have never really commuted by car though, so I can’t really share any stories about that. On the other hand, I also don’t get why people would commute by car when there is decent public transportation.

Fact is that I think I never read as much as I did the nine months that I took the train from Leverkusen to Düsseldorf each day. This was a one hour train ride each way – which is also what I consider the longest a commute should be – and I got so much reading done during that time, it was simply amazing. The key to a good commute is not having to change trains more than once (or maybe twice) and spending the majority of the time in one train, so you can just sit down, relax, and do what you want to do.

I seriously feel deprived of this sacred alone time. Alas, if you don’t like to read, listen to music, podcasts, watching videos or playing with your notebook, then a commute might not be the thing for you. For us people who do like these things, 30 minutes on a train can be the time of the day where we can for once relax a bit, because it is the only time where you might not be distracted by this and that and just able to concentrate on these things we like to do.

Oh man. I miss my commute.