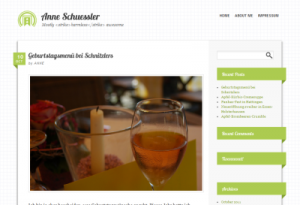 To be more precise: I have another blog. And it’s new. There are no plans to abandon this blog, so don’t worry.

It’s also in German and it deals mainly with food stuff. I had the urge to get back into cooking and writing about food and restaurants and other foodie topics, but I didn’t want to mix these things into this blog. This blog will remain the place for all the developer, technology and geeky topics in my life.

The reason why it’s in German is that I felt that it was easier for me. Also, since I plan to write about the local foodie scene where I live I want it to be easily approachable for anyone who needs some tips and suggestions and it’s likely that they speak German, too.

I admit though that mostly it was a gut decision.

You can visit it here: blog.anneschuessler.com

It has no fancy name so far (and probably never will have, but you never know) and a custom theme that I haven’t really personalized but which I love a whole lot.

So, go check it out. If you are a non-German speaker and see something you would like to know more about, just tell me and I can see whether I can add some kind of English summary or provide you with a recipe in English or whatever it is you need.

And for all the other things I do on the internet, there’s always my about.me page at anneschuessler.com.

We’re doing a little fast forward here to the awesome culinary weekend I had last weekend. Right now there are a lot of gourmet fairs around where we live. The way they work is that for three to five days a number of restaurants of the area put up tents and sell a selection of their food to sample for a very reasonable price. Which means that you get to walk around and get your starters from that restaurant and your main course from another and then the dessert from yet another and then when you’re done start over again until you are full. Basically.

One of the biggest of these fairs takes place in Essen right in the heart of the city with 25 local restaurants presenting what they have to offer. Since I had to work I couldn’t start my little feast until Friday evening when I came there with a friend. On Saturday I went there for a five course lunch and came back for a four course dinner. And on Sunday my husband and I returned or another nice four and a half course dinner.

All in all I managed to cover 12 of the 25 restaurants which is pretty impressive I’d say. I won’t go into details about all the dishes I tried, so I’m just gonna show you. I’ve had a couple of what I like to call culinary weekends these past weeks with my main goal being to find good food while touring around the country (or these parts of the countries that I can reach within an hour long train ride).

Between trying to finish the Song of Ice and Fire series as well as the Hunger Games series, reading and watching Jane Austen and trying to finally finish the last season of TV shows I wanted to write about it, but didn’t really get to it.

But here it goes. The first weekend was pretty harmless in terms of culinary indulgences, but it took me to Münster, so that’s something. I didn’t get to really have lunch there because all of the restaurants that sounded cool would not open until 5 or 6 pm and I didn’t plan on staying so long. So I just bought a tasty apricot muffin at Tollkötter, some white vanilla chocolate, a scoop of hazelnut ice cream and some wasabi-nori crackers and just walked around a lot. Münster is a really pretty town to just walk around in and take in the atmosphere. I even pondered renting a bike to get into full Münster feeling, but I was happy just to walk around on foot. So instead I went back home and decided to just have a quick lunch at the Thai place in the local shopping mall. Sounds a bit disappointing, but I was seriously craving some light Asian cuisine. Although Cha Chà so far has had its lower and higher points for me, it’s a nice option when I want some quick and hassle-free Asian food.

Besides I’m on a quest for the best Tom Ka Gai around where I live, so it was my opportunity to sample the Cha Chà version.

Unfortunately it proved not to be a contender. It’s okay, but somehow the vegetables are a tad too raw, it’s like they’re trying to prove their food is extra-healthy by sacrificing a bit of Tom Ka Gai awesomeness. As some kind of second course I chose a plate of three salad samples with pancakes and soup. The salad actually were great and teh combination with the pancakes was a nice touch. The soup wasn’t great, but tasty. As I said, Cha Chà is kind of unreliable. I’ve had great dishes there and not so great ones, but it was never actually awful, so it’s a good option for some healthy meal after (or during) a small city shopping spree. On Sunday I had planned to check out a new American place, but it wasn’t open until the evening and I needed some lunch, so I changed the plans and went to the Mexican restaurant right in the city. This is probably not what passes as Mexican for anyone who actually knows Mexican food. A US friend of mine usually complains about the lack of original Mexican food in Germany. Basically I just need my Chili con Carne fix from time to time and the one as Sausalitos is pretty fine.

I ordered the Chili which comes with Taco chips and sour cream and the Caesar’s salad, both of which made for a nice lunch, but together too much for me to finish. So, that was the first culinary weekend. It wasn’t that much compared to what is to come for the next ones, but it was a nice start and a great way to spend the days off work.