I made the horrible mistake of installing iOS 4 yesterday evening before going to bed. I had planned about an hour for evertyhing to be done, but boy, was I wrong.

To make it short, this is now my third attempt at completely restoring my iPod. One of the problems that kept occurring was that while I was doing something else on my computer, iTunes kept just popping up and as expected at least one of these times I was just hitting return, which basically cancelled the whole clean installation process. I’m pretty sure that that was end of it. From then on I kept on trying to do a full restore, but since my library consists of a respectable 3270 songs, this takes a while. Like more than an hour.

This morning I thought I’d get it done before taking off for work, but there was an estimated ten to fifteen minutes missing until the whole thing was done and I had to cancel the syncing. Now this is the third attempt and I don’t think I have another choice but just wait until it’s done, even though I might like to just go to bed. Oh, the trouble technology puts us through.

Now you might wonder why I still care so much about my iPod. It’s because so far, the Motorola Milestone hasn’t replaced what I mostly use my iPod for: Media player and little entertainment device. I use the Motorola for taking pictures and videos, using location-based services, updating twitter or simply accessing the internet (and currently checking the last results of the World Cup).

I’ve gotten so used to having access to useful information everywhere all the time that everytime I go abroad (which might include my parents-in-law’s, who live so close to the Swiss border that half of the time I’m there my cell phone mistakenly assumes it’s in Switzerland)… anyway… everytime I go abroad I feel robbed of that information. I have a very basic and unexpensive data plan, mostly because I just wanted a simple data plan which emphasized on the DATA aspect of the whole thing. I use the phone for calls and texting, but mostly I’m interested in all the not phone related activities.

I checked out a couple of options for global roaming today, but none of them catered to my needs. I don’t care for any cheap call rates or free text messages. The only person I’m likely to call is my husband and that’s about once a day at the most. What I miss is the opportunity to use all the helpful little apps that help me get around in Germany so much. Finding a restaurant in London. Checking out the timetables for the train back to Luton. Whatever. What I need when I’m abroad is directions, suggestions for restaurants and activities and information about getting somewhere and probably back.

The options I found for simple data plans for global roaming were still insanely expensive, so it would probably cost me less to just use the options my provider offers anyway. There’s also the option of just getting a SIM from the country you plan to spend some time in, but the last person I knew who tried that was really frustrated by the process so it didn’t seem tempting at all.

Do you all just go de-mobile when you’re abroad? Do you simply not mind about the costs? Or is there a simple trick to stay mobile with your cell phone at a reasonable price? Please enlighten me. This is just s puzzle that… well… leaves me puzzled. 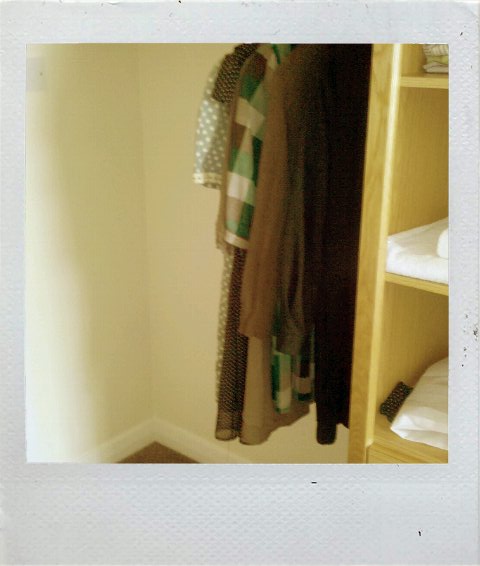 Today started the last leg of my training duties in the UK. Other than the last two times where I just came in the evening before, held a training session in the morning and took the flight home in the afternoon I’ll be here to help the developers work on a training project for the whole week. Today I got in around noon, so the taxi driver drove me directly to the office where I unloaded all my stuff and hauled my suitcase and bag directly into the training room.

Later we planned to go to Harpenden to have dinner which meant that we had to get back to the hotel first for me to carry my suitcase to the room and then catch a cab to Harpenden.

The very first thing I did when I got into the room was: Unpack. Unpack everything. Get ALL the clothes out of the suitcase. Set the books on the nightstand. Get the toiletries and stuff into the bathroom and out of their little plastic bags. Put my pajamas on the bed.

I found that this helps me get comfortable in any hotel room where I intend to spend more than one night. It might sound a little overdone, but I like to know that everything is in its place and I’m not living out of my suitcase. Even in a pretty boring hotel room it gives a feeling of having your own space. 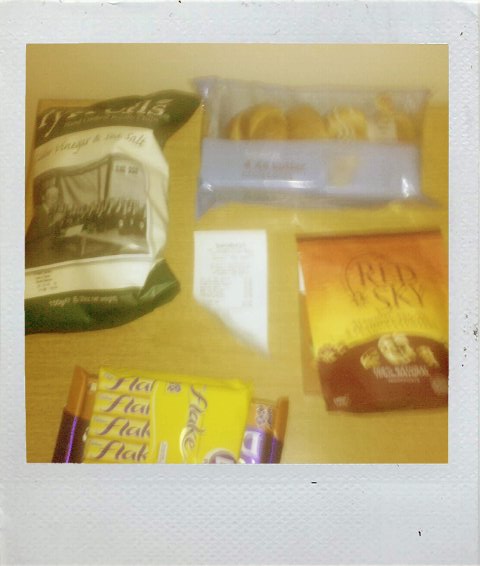 After having a nice dinner at an Italian place in Harpenden (the evening was splendid, so we could sit outside) we also went to a supermarket to get some snacks. Unfortunately the biggest disadvantage of this hotel (apart from the WiFi not being free, which is like my reason number one not to stay here again) is that there’s no fridge in the rooms, so the options were limited, but I still got a decent selection of snacks that will help me to get away without having to pay for a breakfast I don’t really want while still not starving before lunch. Naturally there’s some crisps (So what? I’m in England here.) and chocolate involved, but also nuts and croissants (okay, not very healthy either) and some nut bars. And lemon flavored water, one of my favorites.

This also makes the place a bit nicer. I can see myself spending the evening watching TV shows on my laptop while having a little snack before going to sleep.

So, I have my stuff neatly ordered the way I want it plus some snacks I like. It’s not amazing, but it’s better than nothing and it helps making a hotel room far away from home feel at least the tiniest bit like something that is mine (at least for the time I’m staying here).

I came back from a half-day training in England last night. The whole development team is holding training sessions for a group of developers from Vietnam and the UK for about three weeks and it’s a lot of going back and forth.

I only knew four people out of a group of about 20 participants. This can be quite intimidating. Yet, I imagine these kind of situations may be just as intimidating and awkward for the participants as it is for the trainer. They don’t know me any better than I do know them. They don’t know what to expect from the training, how I will react, whether they can be comfortable asking questions, how to best address me and so on.

I find there are very simple ways to show the participants of a training that:

b) They don’t have to be afraid to ask questions or ask you to clarify something.

c) You are interested in who they are as well.

The tricks I find to work are the following:

Explain that questions are important for the training and for you
This may seem obvious, but I’d still want to mention it. Tell your participants that you want and you need them to ask questions. Tell them that this is important for you as well to make sure that what you teach them is actually clear and makes sense.

Learn their names
When I say learn their names, I mean, try to make an effort. I was holding a training for a group of people from Vietnam and UK and at one point when everyone was busy playing around with the system on their computers I walked around and tried to get the names of the Vietnamese guys right. It’s not that easy with foreign names and you’ll probably not get it perfectly, but showing an interest in learning who your participants are and what their names are and how they are pronounced is important. After all your name is important to you and it is part of who you are. Practicing someone’s name in front of the whole group also shows your participants that you are not perfect, but willing to learn new stuff.

Bring sweets
If I learned one thing in my years of working it’s that people like cake, cookies, and whatever other sweet things there are. Basically, nobody is ever too old oor too serious to not like chocolate. For the training I bought some German sweets at the airport to bring to the training and told the story of how I lived right down the street from the Haribo factory in Bonn and could smell licorice in the air sometimes. Whether it’s chocolate, cake, donuts, cookies or something else. Your participants probably will like it. Plus, bringing a bit of sweetness to your training might add a bit to the fun side of a training.