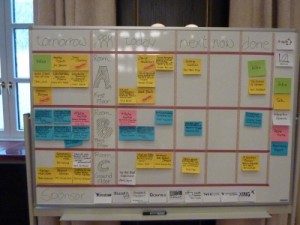 I was lucky enough to be able to attend the first Lean Kanban Central Europe Conference in Munich this week.

Being new both to these kind of conferences (whatever that means) and Kanban (but not Agile) there were a lot of great first experiences and it was definitely a small adventure. If you follow me on Twitter you might have noticed the mass of tweets all with the hashtag #lkce11 that I sent out on Monday and Tuesday. Yes, I approached the whole thing in a way that seems to work well for me, by immediately making myself visible to whoever might be interested. But I’ll be writing more about Twitter and conferences in the next days (hopefully), because I realized it is an interesting topic and definitely worth a blog post.
Ever since I got back I’ve been suffering from a cold. It actually started on Tuesday and got worse in the afternoon, then definitely worse on the train ride home. So I spent most of today on my new sofabed (which was just delivered this morning as well) trying to get better as soon as possible. (I also now own more tea than I will ever be able to consume, because I shouldn’t be allowed to shop for tea when my throat hurts. Makes me all cravy and then stupid things are bought.)
When recapping the event for my team lead this morning (I went to work for a whole of 90 minutes) I realized that I learned so much that it felt like the double amount of sessions than I actually attended. There was a moment when I went through the program trying to find the sessions that I didn’t already mention and finding that nope, that was really it. My memory is still convinced that it just had to be more than that.
I would like to recap the event and the session in more detail but my current cold-affected brain won’t let me do that with the concentration that it deserves.
So, let me just say this:
First of all, thanks again to all the people organizing this event. It was great fun, I saw very interesting sessions with awesome speakers.
Thanks also for the variety of sessions and speakers. As a Kanban newbie I was glad to get an introduction to Kanban as well as sitting in some rather challenging sessions. The mixture of theory, interactive sessions, experience reports and of course the keynotes worked pretty well for me.
I would also like to thank all the great, funny, interesting, smart and a least mildly geeky people who put up with me during and between sessions. I hope I did say something smart or mildly interesting at times, too.
As a short teaser for upcoming blog posts, I would like to mention my personal top two of the sessions I attended, which was an immensely interesting session about complexity thinking by Jurgen Appelo(@jurgenappelo on Twitter) – who, if you don’t know him yet, seems to be mostly awesome in general – and the funny and captivating keynote by Stephen Bungay in which he went back all the way to tell us what management lessons we can learn from 19th century military.
Sounds interesting? Believe me, it was.
So, stay tuned for more stories and recaps from this event. And just in case you wanted to know. Yes. There was also cake.