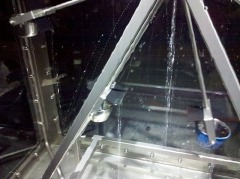 „Learn three new things before you come back to us, “ the kindly man had commanded Cat, when he sent her forth into the city. She always did. Sometimes it was no more than three new words of the Bravoosi tongue. Sometimes she brought backsailor’s tales, of strange and wondrous happenings from the wide wet world beyond the isles of Braavos, wars and rains of toads and dragons hatching. Sometimes she learned three new japes or three new riddles, or tricks of the trade or the other. And every so often, she would learn some secret.

On Saturday I learned that there’s something called the Lorenzian Waterwheel which due to how it’s constructed will change its direction in a completely chaotic and therefore unpredictable manner. I learned that microfiche has a durability of about 500 years (compared to the meagre 30 years CDs are expected to last). And I learned that the reconstruction of a finial of the Cologne Cathedral that serves as an example of how big the finials actually are has info panels in a lot of different languages including the Cologne dialect. 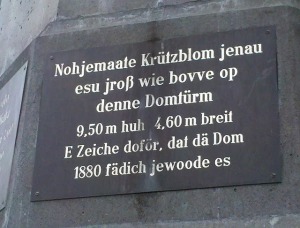 This Saturday we went to a children’s science museum in Cologne called Odysseum. Without any children, naturally. People who know me might already be aware of the fact that I love going to the zoo, or better even, the aquarium. I also love any science museum with hands-on experiments – and the only reason why I wasn’t disappointed not to go to the Exploratorium in San Franciscos was because we went to see Where the Wild Things Are instead. So, yeah. I’m only an adult by appearance. And by the fact that I earn my own money and pay taxes, I guess.
But leaving behind the whole thing about how I think there should be way more museums where you can touch stuff and push buttons and turn handles and make things move or change or whatnot, and going back to the original quote from A Feast of Crows by George R.R. Martin.
The girl in this quote is asked to go out each day and come back with three new things that she knows now that she didn’t know yesterday. It’s such a simple rule that I think we all need to add this little rule to our lives. Each evening I should ask myself what I learned today. And make sure that I don’t cheat.
Just like in the book, there should be two simple rules.
1. It’s gotta be something new, something I didn’t know when I woke up that morning.
2. Only facts count. No guesses or something somebody told somebody else without having confirmation.
The second rule is kind of interesting, because the nature of facts are tackled in the book as well and the rule can be bent a bit to accomodate for a grey area of not-quite-facts.

„Tormo Fregar will be the new sealord.“
„Is that what they are saying at the Inn of the Green Eel?“
„Yes.“
[…] He swallowed and said, „Some men say there is wisdom in wine. Such men are fools. At other inns other names are being bruited about, never doubt.“ He took another bite of egg, chewed, swallowed. „What three things do you know, that you did not know before?“
„I know that some men are saying that Tormo Fregar will surely be the new sealord, “ she answered. „Some drunken men.“

Learning three new things each day might not sound like a real challenge, but making it a daily ritual might help being a bit more attentive in your daily life and paying attention to what you stumble upon in terms of little bits of facts and new knowledge and actually remembering what you learned at the end of the day.
In fact when writing this article I actually had problems coming up with three things that I really didn’t know before that seemed worthy enough to count. So, maybe it is a challenge after all.
So, if you read this at the end of the day, what three things did you learn today, that you didn’t know before?
Average Rating: 4.5 out of 5 based on 296 user reviews.

Schreibe einen Kommentar zu you are so right Antworten abbrechen