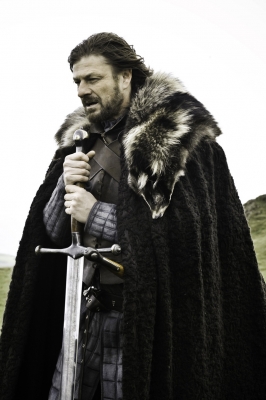 I recently read Game of Thrones, partly just because and partly because I wanted to be done with the first book of the series before the HBO series started. (Might I say that I think that I was right to read the books first. While I really liked the pilot I’m not sure how many things are lost on someone who hasn’t read the books. It might still work, but it’s probably not the same.)

In the book I stumbled upon two passages that reminded me of very valuable management lessons which apply nearly as is to your common workplace. Here’s the first one:

„Know the men who follow you,“ she heard him tell Robb once, „and let them know you. Don’t ask your men to die for a stranger.“ At Winterfell he always had an extra seat set at his own table, and every day a different man would be asked to join him. One night it would be Vayon Poole, and the talk would be coppers and bread stores and servants. The next time it would be Mikken, and their father would listen to him go on about armor and swords and how hot a forge should be and the best way to temper steel. Another day it might be Hullen with his endless horse talk, or Septon Chayle from the library, or Jory, or Ser Rodrik, or even Old Nan with her stories.

I think this resembles closely to what I’d say goes for a manager. I mean, you don’t have to be each and every one of your employees‘ best friend, but at least get to know them a bit and make them feel that you’re interested in them. This can be purely work-related, by the way. Find out what they like to do, what tasks they enjoy and which ones they hate, what gets them motivated. In the best case, this is a win-win, because you might be able to assign tasks to the employee who has the most interest in doing a good job. You’re happy, they’re happy. I say, in the best case.

But even if you can’t just magically pull awesome tasks from your sleeves to hand out to your happy employees, getting to know them is important. We’re all just people and unless someone really is the kind of guy who wants to be left alone, we enjoy talking about… well… stuff. What you make of it is up to you and maybe it’s nothing more than showing that you care. In the end, though your employees probably won’t literally die for you, chances are they’re more likely to stick up for you and the rest of the team if they feel connected.

(Mind you, I’ve never been in a manager’s position, so this is just my idealistic developer’s point of view. If you want to read more about managing software developers which I’ve heard is very similar to herding cats, just go over and read Michael Lopp’s blog Rands in Repose or his great book Managing Humans.)

Another quote that immediately made me thing of some valuable software development lesson was this:

That was the trouble with the clans; they had an absurd notion that every man’s voice should be heard in council, so they argued about everything, endlessly. Even their women were allowed to speak. Small wonder that it had been hundreds of years since they last threatened the Vale with anything beyond an occaxional raid. Tyrion meant to change that.

That is a classic example of what I learned to know as Design by Committee Must Die. I didn’t come up with this lovely name, there is an excellent article over at Smashing Magazine which says about all that there is to say. It’s true though, while I think it’s important to have people discuss ideas at work, there are certain decisions that are better left for a single person (or at least a very small group of maybe two or three people) to make. The bottom line is, a) you never get done with anything if you want to discuss it first with everyone and b) half of the time you try to make compromises to make everyone happy which leaves you with a design that is so inconsistent that nobody’s happy.

This isn’t a call for tyranny, but it is a call for healthy judgement of decisions that don’t need to be made with the whole team. If someone has valid arguments to object the final decision they will (hopefully) voice them and if they are valid, they should be heard. But make that decision first and then see who deems his time and energy worthwhile to defend their take on the idea.

I find it fascinating who these ideas which are presented in a book in contexts of war and castles and kings and whatnot are so applicable to today’s management values. But then again, maybe it’s not that strange and there are just some values that hardly ever change.